With video increasingly supplanting traditional web content so rapidly, it was clear we needed to make a move at the Georgia Department of Public Health. After 18 months of planning, my pipe dream became a reality. 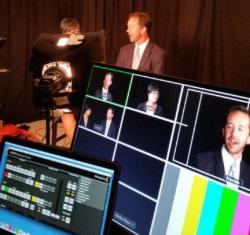 “Stand-by. We’re on in 30 seconds,” a staffer from my division of communications announced to those gathered, marking the inauguration of our new broadcast studio and an end to months of preparation. For just a few moments in time, the ordinary noise of work was interrupted, replaced by something almost foreign – the sights and sounds of a busy television studio. We were broadcasting to some 4,000 public health staff across Georgia. And it felt amazing, considering we’d moved in to a storage room.

Lodged in a small 216 square foot space, the studio is equipped with three broadcast-quality high definition cameras, lighting, backdrops, a teleprompter and an audio system – all connected through a professional audio/video switcher with graphics and green-screen capability.

Already, we have produced radio and Internet social marketing spots, conference presentations and training videos. With endless potential, our storage room studio comes at zero cost, when considering the studio has already paid for itself by eliminating the fees associated with outsourced production. 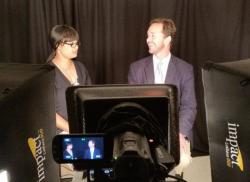 To learn more about the studio, or how you can accomplish the same “storage room” result, contact me for consulting.